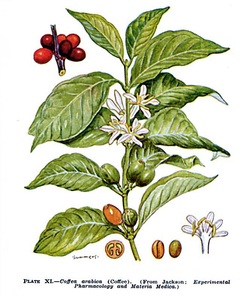 Arabica and Robusta Coffee PlantCoffee Plant OverviewThe coffee plant is a woody perennial evergreen dicotyledon that belongs to the Rubiaceae family. Because it grows to a relatively large height, it is more accurately described as a coffee tree. It has a main vertical trunk (orthotropic) and primary, secondary, and tertiary horizontal branches (plagiotropic).

The Difference Between Arabica and Robusta Coffee BeansWhile there are several different coffee species, two main species of coffee are cultivated today.  Coffea arabica, known as Arabica coffee, accounts for 75-80 percent of the world's production.  Coffea canephora, known as Robusta coffee, accounts for about 20 percent and differs from the Arabica coffees in terms of taste. While Robusta coffee beans are more robust than the Arabica plants, but produces an inferior tasting beverage with a higher caffeine content.  Both the Robusta and Arabica coffee plant can grow to heights of 10 meters if not pruned, but producing countries will maintain the coffee plant at a height reasonable for easy harvesting.

Coffee Plant Growth and DevelopmentThree to four years after the coffee is planted, sweetly smelling flowers grow in clusters in the axils of the coffee leaves.  Fruit is produced only in the new tissue.  The Coffea Arabica coffee plant is self-pollinating, whereas the Robusta coffee plant depends on cross pollination.  About 6-8 weeks after each coffee flower is fertilized, cell division occurs and the coffee fruit remains as a pin head for a period that is dependent upon the climate.  The ovaries will then develop into drupes in a rapid growth period that takes about 15 weeks after flowering.  During this time the integument takes on the shape of the final coffee bean.  After the rapid growth period the integument and parchment are fully grown and will not increase in size.  The endosperm remains small until about 12 weeks after flowering.  At this time it will suppress, consume, and replace the integument.  The remnants of the integument are what make up the silverskin.  The endosperm will have completely filled the cavity made by the integument nineteen weeks after flowing.  The endosperm is now white and moist, but will gain dry matter during the next several months.  During this time the endosperm attracts more than seventy percent of the total photsynthesates produced by the tree.  The mesocarps will expand to form the sweet pulp that surrounds the coffee bean.  The coffee cherry will change color from green to red about thirty to thirty-five weeks after flowing.  See Flash movie onCoffee Bean Development.

The roots of the coffee tree can extend 20-25 km in total length (Malavolta, 195) and the absorbing surface of a tree ranges from 400 to 500 m2 (Nutman).  There are main vertical roots, tap roots, and lateral roots which grow parallel to the ground.  The tap roots extend no further than 30-45 cm below the soil surface.  Four to eight axial roots may be encountered which often originate horizontally but point downward.  The lateral roots can extend 2 m from the trunk.  About 80-90% of the feeder root is in the first 20 cm of soil and is 60-90 cm away from the trunk of the coffee tree (Mavolta, 195-196).  However, Nutman states that the greatest root concentration is in the 30 to 60 cm depth.  The roots systems are heavily affected by the type of soil and the mineral content of the soil.  To be thick and strong, the coffee roots need an extensive supply of nitrogen, calcium and magnesium. During planting the main vertical roots are often clipped to promote growth of the the horizontal roots, which then have better access to water and added nutrients in the top soil.

The elliptical leaves of the coffee tree are shiny, dark green, and waxy.  The coffee bean leaf area index is between 7 and 8 for a high-yielding coffee (Malavolta, 195).  The coffee plant has become a major source of oxygen in much of the world.  Each hectare of coffee produces 86 lbs of oxygen per day, which is about half the production of the same area in a rain forest (source: Anacafe).